The Early Medieval Forum (Fórum včasného stredoveku) took place on the 3rd of February in the Archaeological museum in Bratislava. The aim of this event was to unite the enthusiasts on the early middle ages reenactment, especially the reenactors, the achaeologists and historians or the craftsmen. The idea was to create a platform for all these enthusiasts to get to know each other, share their knowledge, present their ideas and concepts, broaden their horizonts and participate on the discussions.
Slovenská verzia TU (article in Slovak).

The absence of similar events in our region led me to the idea of the creation of this kind of platform. Subsequently I presented this concept to Tomáš Vlasatý who supported it and we decided to proceed to organize it. Our reenactment groups Svjatogor and Marobud became the organizing bodies of the Early Medieval Forum. The core part of the organisation was held by Tomáš and me and the members of Svjatogor, Terézia Patschová and Andrej Sekáč, participated on the realisation of the event.

The Early Medieval Forum was to be created as a base for discussions with a smaller number of participants coming from different reenactment groups or institutions who would come to not only to passively participate, but to join the discussions and to contribute with their own knowledge and view. The base for the discussions were the presentations linked to the early middle ages and its reconstruction. Bratislava was chosen for the Forum as one of the organizing groups Svjatogor is based in this city. The location of Bratislava is on the crossroad of several routes which facilitates the participation for the enthusiasts not only from Slovakia but also from its neighbouring countries.

The event took place in the baroque basement of the Archaeological musem of the Slovak National Museum in Bratislava. The museum deserves our gratitude for their assistance, help and these formidable premises.
Approximately 25 participants from Slovakia, Czech republic, Poland and Austria were present at the event. Amongst them there were the memberts of the early medieval reenactment groups mainly reconstructing the old Norsemen and Slavs, craftsmen, archaeologists, employees of the Archaeological museum and even the mayor of Bojná.

The honor of opening the Early Medieval Forum was mine and Tomáš´s. We welcame the participants, presented our concept and the organisation and after that the participants were to present their papers. 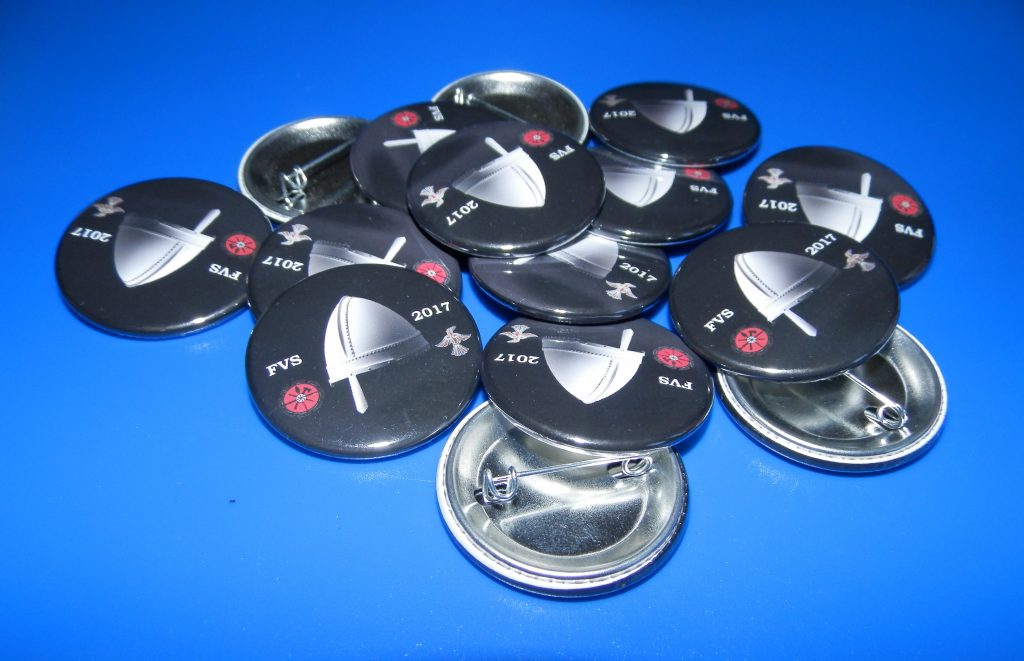 The badges for the participants of The Early Medieval Forum.

The first one to present was PhDr. Vladimír Turčan from the Archaeological museum of SNM whose specialization is the archaeology of the early middle ages and mainly the Slavic culture. He presented the archaeological site Bojná and the hillfort Bojná I – Valy. He introduced us to the history of the archaeological prospection of this site, its location and findings. Later the findings were placed to the overall image of the hillfort and PhDr. Tučan proposed several intepretations of some aspects of this settlement.

PhDr. Vladimír Turčan with his presentation of the Bojná I. – Valy hillfort. Photo: Radoslav Čambal

Mr. Turčan was followed by Tomáš Vlasatý, co-organizer of the Forum and reenactor of the old norse culture, founder of several reenactment projects and known character of the early medieval reenactment scene. He followed the presentation about Bojná by his presentation of the Bojná helmet, which is the symbol of the Forum. We were shown the analogies and similar findings of this type of helmet and the presentation was supported by the actual replica of this helmet that was brought to the Forum by the mayor of Bojná – Jozef Stankovský, right from the Archaeological museum of the Great Moravia in Bojná.
The second presentation of Tomáš was the project of his friend and colleague from Marobud reenactment group, Karel Sýkora. In the second part of the year 2016, Karel took on his pilgrimage from Velehrad (CZ) to Rome (I), alone and only with his historical kit and clothing. The conclusions from this pilgrimage and the knowledge Karel gathered were presented to us by Tomáš who set it to the context of the early middle ages travelling. 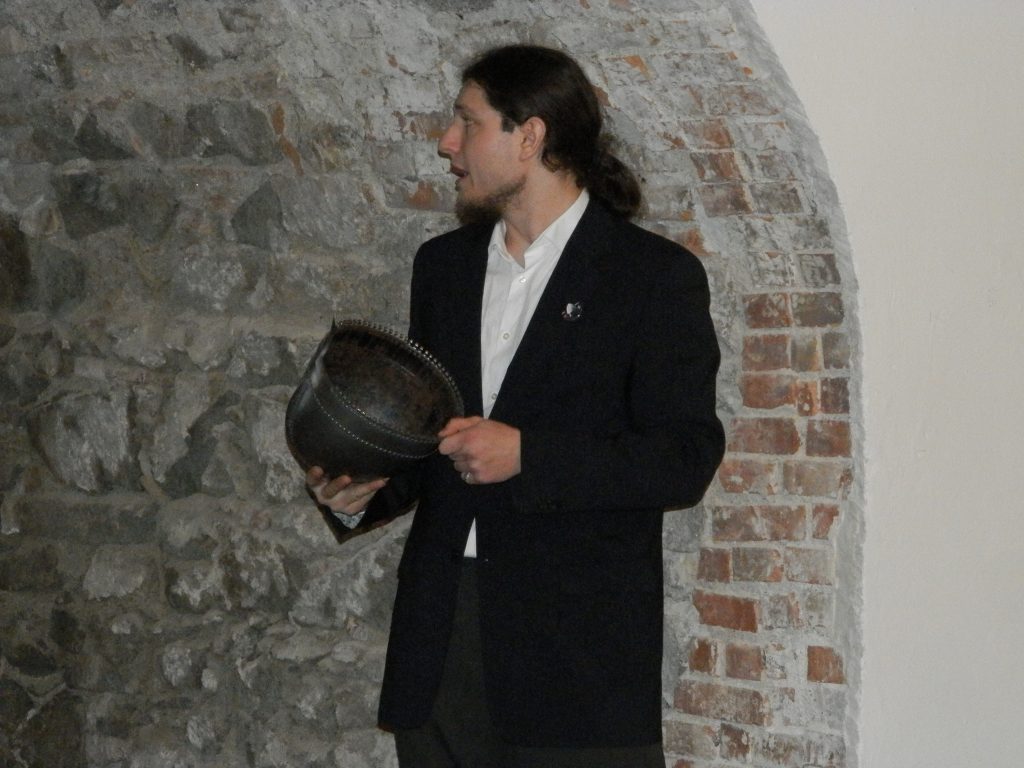 Tomáš Vlasatý during his presentation, holding the replica of Bojná helmet.

The following contribution was held by Klaudia Karpińska from the Institute of Archaeology at the University of Rzeszów, Poland. She as a reenactor herself presented us her paper called “Viking Re-enactment in Poland: Beginnings, Development, and Current Problems“. In this paper she presented the local reenactment scene in Poland, both its negative and positive aspects that we could compare with the development of reenactment in our countries. 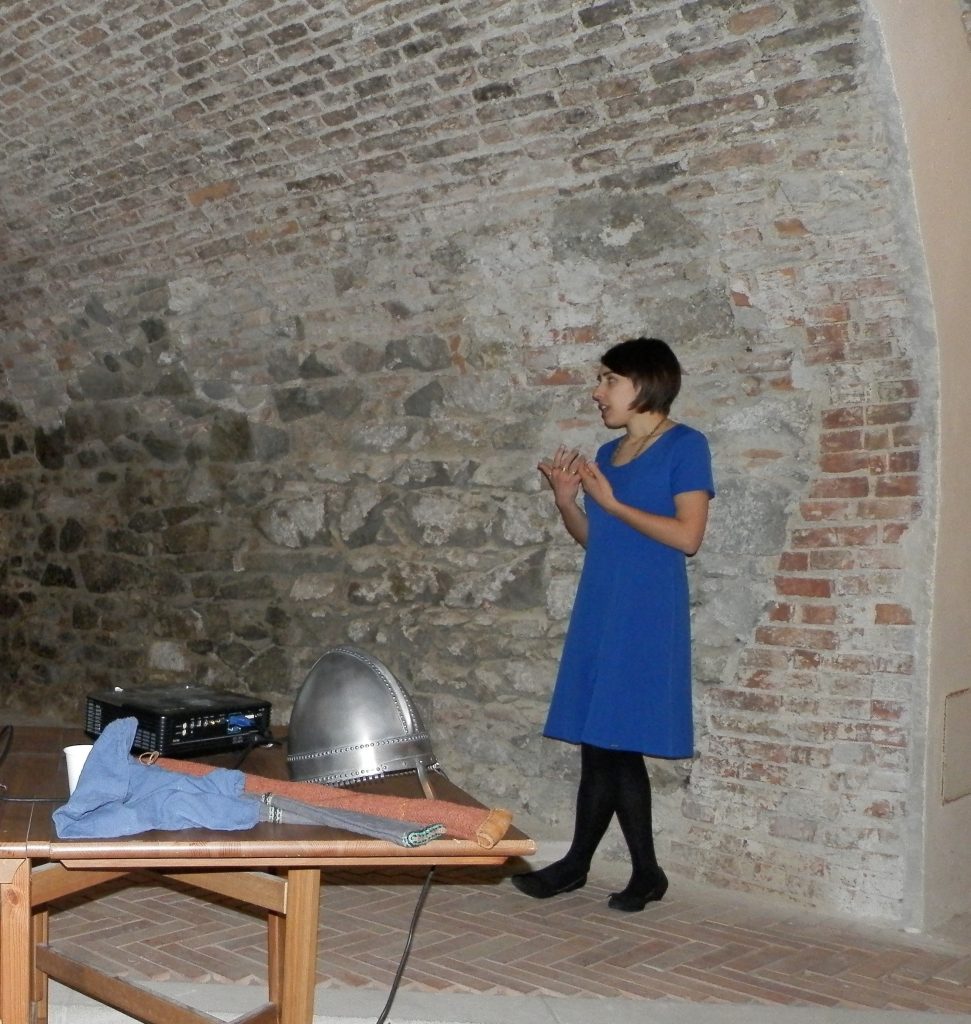 Klaudia Karpińska from the Institute of Archaeology, University of Rzeszów, Poland.

Peter Kocúr from Slovakia explained the manufacturing of the authentic riveted mail armour with the use of the methods that are as close as possible to the original ones. He talked about the different parts of the manufacturing, its problems, difficulties in choosing the right material, pattern etc. This explanation was supported by the exemplar of this kind of armour brought and made by Peter Kocúr and the participants were free to see and inspect the details of this armour. 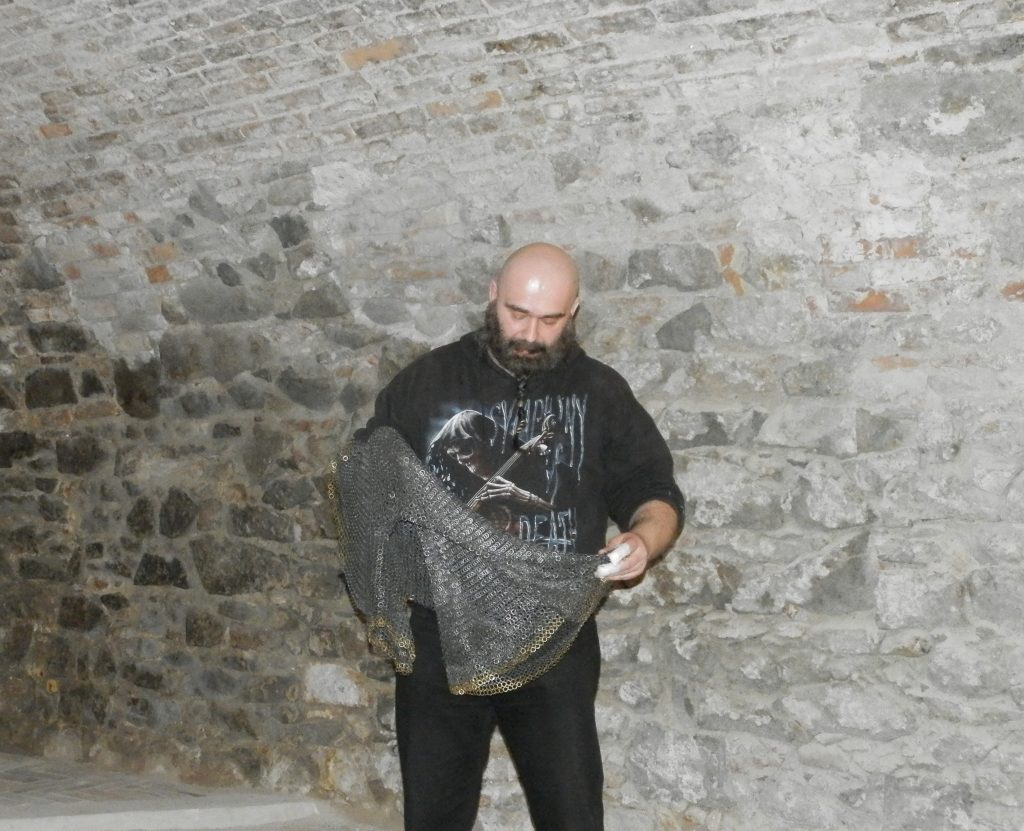 Peter Kocúr during his presentation, holding the armour made by him.

Róbert Môc is a respected sword maker from Slovakia that produces swords manufactured with the use of the original historical technologies and methods. He presented the unique sword finding from Krásna nad Hornádom, Slovakia using the actual preserved original finding. His main points consisted of the analysis of the technologies used on this sword as well as the methods of the decoration of the sword. He presented his intepretations of this finding and pointed out the problems and differences of the modern sword reproductions. 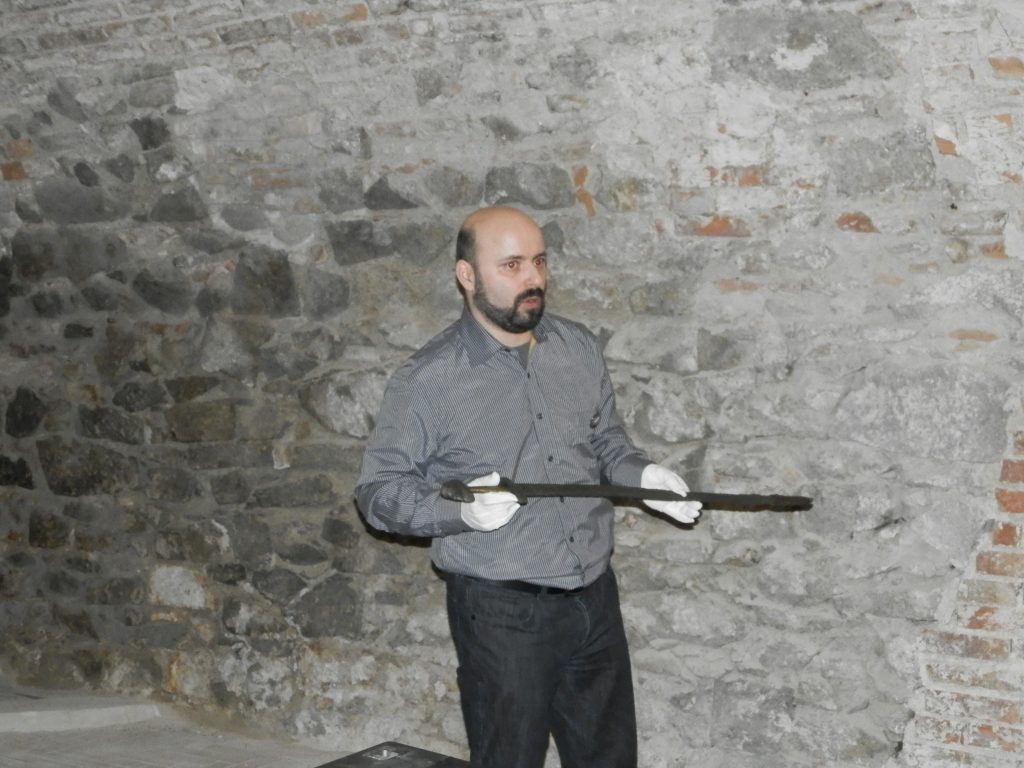 The topic of swords was further developed by Roman Král from Vanir reenactment group representing the Great Moravian period. His point of interest was the intepretation of the anatomy of the early medieval swords and its implications on the actual use of the sword. Amongst his main points was the lenght of the grip that is often poorly reconstructed and too long on the modern replica swords which changes the original characteristics of the sword. 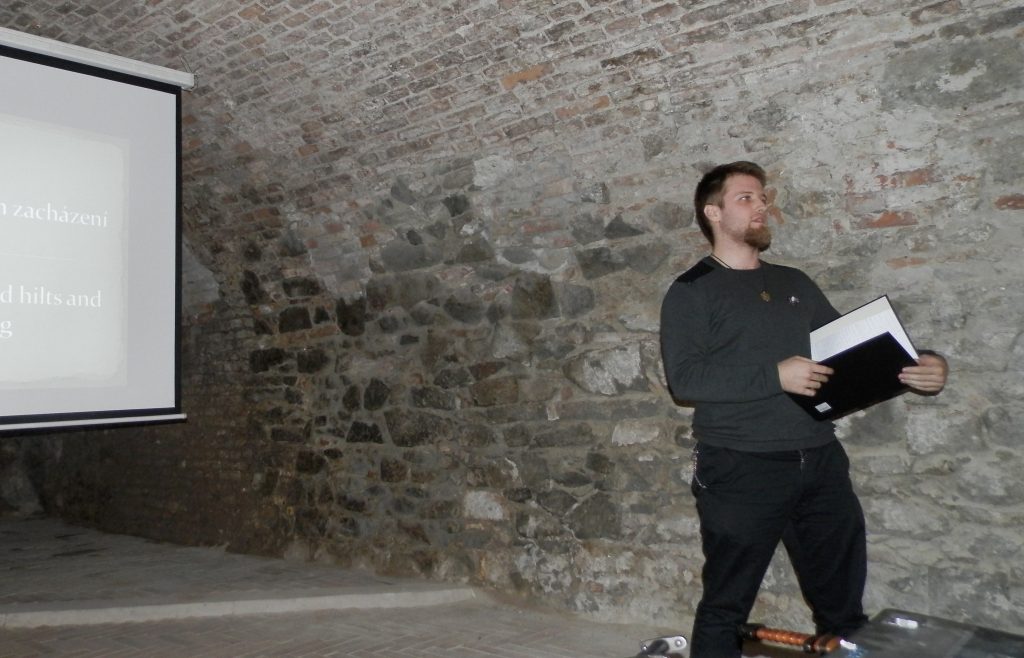 Roman Král presenting his intepretations on the use of the early medieval swords based on their anatomy.

The last presentation was provided by Jan Pavelka from the Silesian university in Opava, Czech republic. His presentation was on the ley farming and the use of the pioneer species in various crafts including basketry, wickerwork etc. The different methods of farming and use of the natural resources were shown as well as the organic archaeological findings that have the potential to be used in the reenactment. This topic could be considered unusual but it is a quite important part of the overall material culture of the people of the past and should be fully included in the reconstruction of history.

Jan Pavelka from the Silesian university in Opava, Czech republic during his presentation on the ley farming and the use of the pioneer species.

Each of the presentations was followed by the questions and the discussion of the participants of the Early medieval forum. Especially the discussion helped to raise interesting points and challenging questions on these topics. In the back of the basement there was a table with the replicas of the maille armour and the Bojná helmet that everyone could see. On the top of that the participants brought their books with them to share the knowledge of these books and to show them to their colleagues.

After the Forum has ended, we moved to the table where the roasted pig was awaiting us. We feasted and continued in a friendly atmosphere until the new knowledge and good food tired us completely. Then the rest of us moved to the city centre of Bratislava to finish our day in a pub with a good beer. 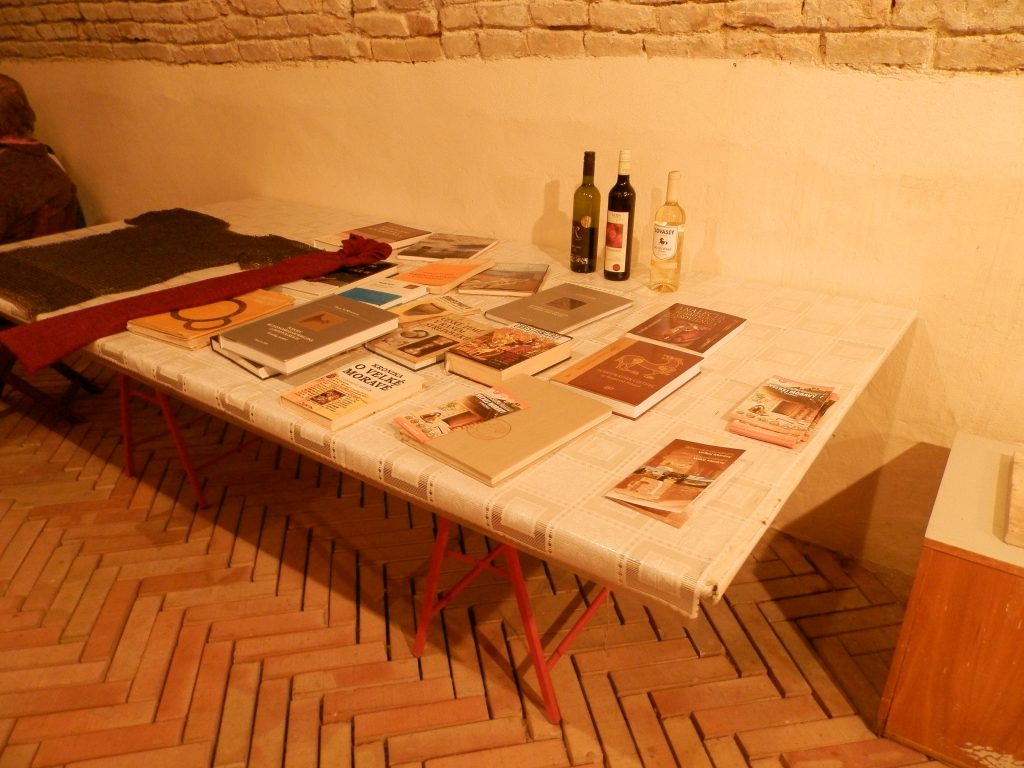 Replicas and books brought by the participants of the Early Medieval Forum.

As not every participant headed home after the Forum, those of us who stayed in Bratislava went to see the expositions at Bratislava castle. The Historical museum of the Slovak National Museum provided the participants with a free admission to their expositions where we could visit the current project “Celts from Bratislava” (Kelti z Bratislavy) and the exhibition dedicated to Slovakia from the Prehistory to the Early middle ages. We tortured our participants by the large number of stairs that lead to the Crown Tower of Bratislava castle but the view was formidable.
The last of us visited the old city centre of Bratislava to stroll in the old streets and taste some more beer. 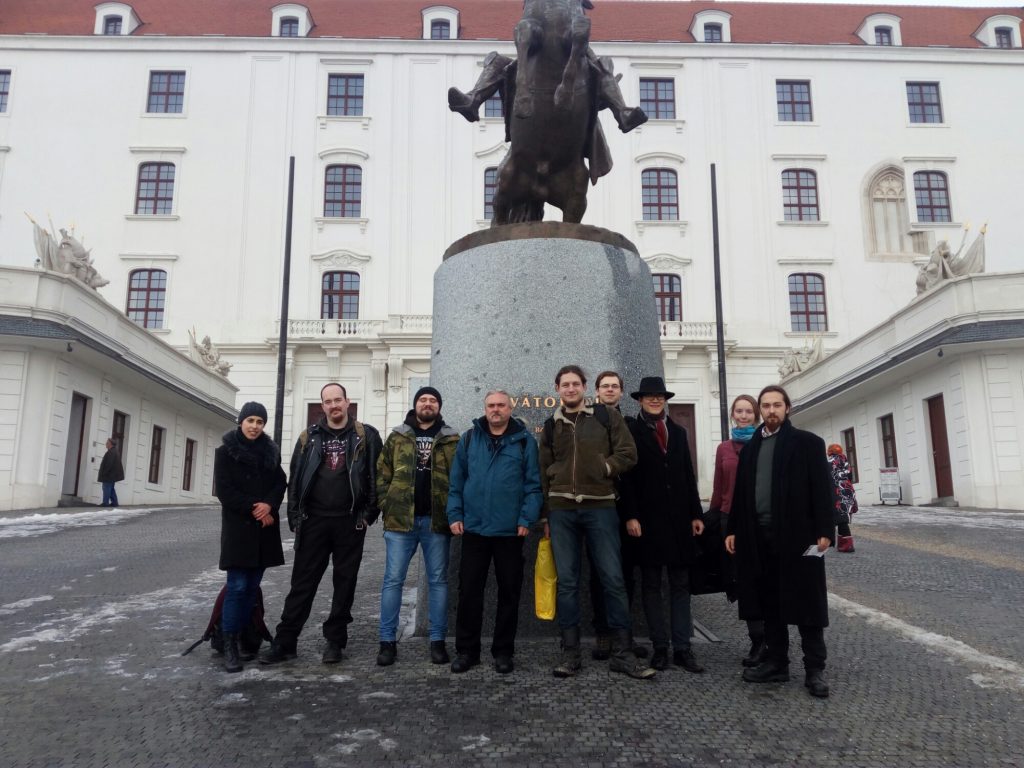 The participants at the Bratislava castle, heading for the expositions.

The Early Medieval Forum recieved overally positive feedbacks right after the event and also later via the feedback form on the internet. Despite several problems we are aware of, this form of event has proven its purpose and it is reasonable to discuss the possibility of organizing the Forum also next year with some minor changes, higher number of participants and new interesting topics on the early medieval reenactment.
There are indeed aspects that we can improve both in the event itself and in communication and informing about the Forum. We may consider creating the website where we could inform about everything concerning the Forum, share photos, publish possible articles etc.

In the name of all the organizers and the groups Svjatogor and Marobud, I would like to express my gratitude to all the speakers, participants, supporters and the Archaeological museum SNM and its employees for helping us with the preparation of this wonderful event. We believe that the Early Medieval Forum will be back and this idea will help to stimulate the organization of similar events. 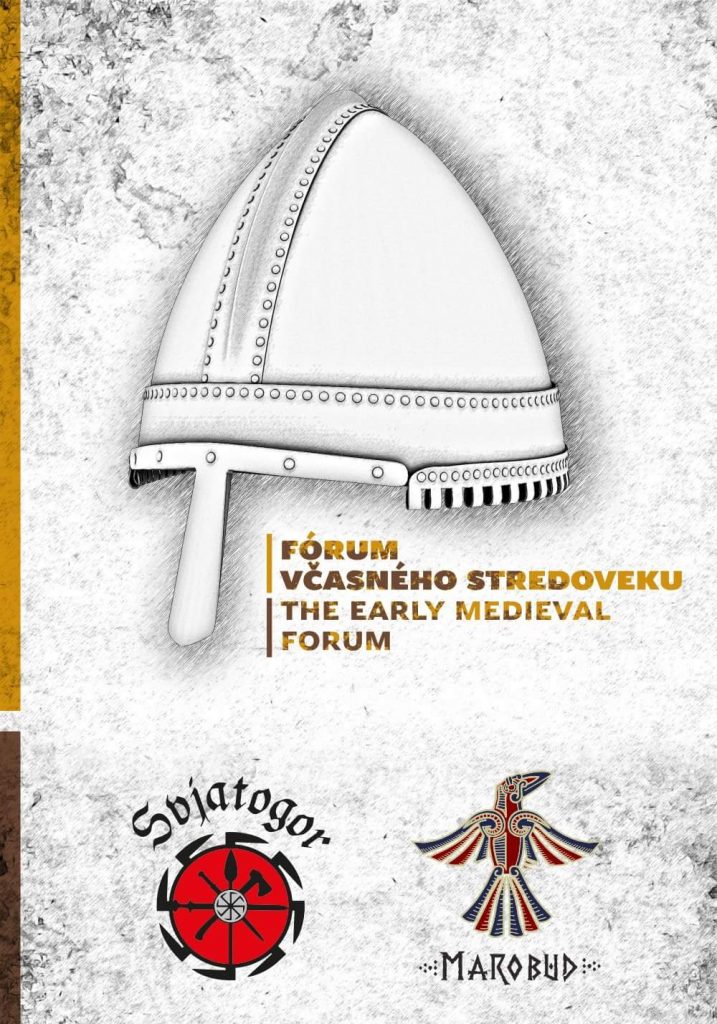 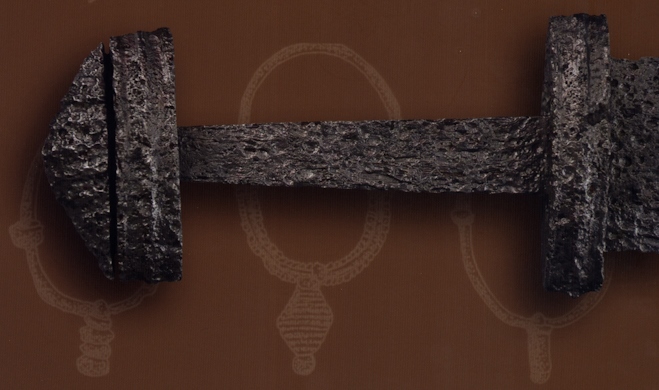